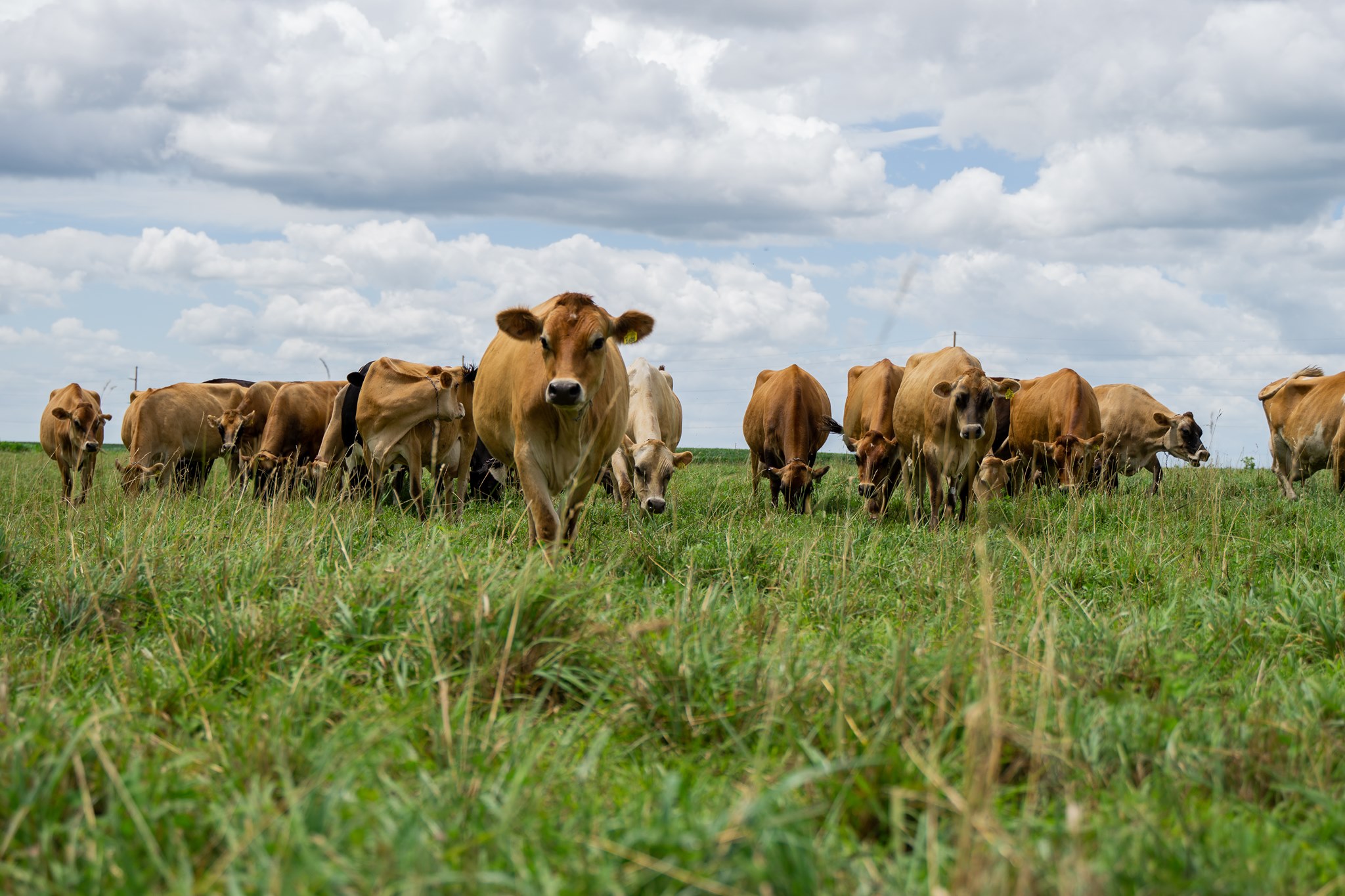 There is hardly a more pastoral scene than a field full of grazing dairy cows, and Illinois has plenty of them on our state’s small and medium-sized farms. Most milk that Illinois residents drink still comes from cows, and like all other locally grown food products, the milk, cheese, yogurt, kefir, sour cream, and other dairy products from Illinois farmers are the freshest you can buy.

Read about Little Brown Cow Dairy, check out where you can find their products, and visit the Buy Fresh Buy Local Illinois directory to find more of Illinois’ great small dairies.

Search for dairy farms near you!

Terry Hoerbert, who owns the farm with husband Bob Hoerbert, just exudes joy over their dairy farming life and especially their small herd of friendly and mischievous Jerseys — the little brown cows that give the dairy its name. But they had to travel a hard road to get to this point, which included a pair of family tragedies in late 2017.

These experiences could have prompted the Hoerberts to give up dairy farming. Instead, they re-evaluated their practices, switched from commercial dairy production to smaller-scale sustainable farming, and built their own pasteurization/processing plant on their farm.

A Dairy of Laid-Back Bovines and Persevering People

Most people probably think of the black-and-white Holsteins when they think of dairy farms. But Jerseys are the bovines of choice at Little Brown Cow Dairy in west-central Illinois, and owners Terry and Bob Hoerbert wouldn’t have it any other way.

Terry Hoerbert says that the Jerseys’ smaller size was the best fit for the pig farrowing house that they turned into a cow barn, adding, “But also, they had better butterfat and protein in their milk.” And she describes how, as cows go, Jerseys are personality-plus.

“They are a good, docile personality character…” Terry says. “They get into mischief. They’re nosy, they like to come up to you. We’ve got one cow that just inevitably can’t follow everybody else, she has to squeeze her way through the smallest little areas that no other cow can fit through… That’s why we chose Jerseys, and that’s it. We’ve never, never looked back on that.”

The Hoerberts, who previously had done other types of farming, starting doing dairy in 2006 at the urging of daughter Kortney, then in 7th grade, who had fallen for the dairy cows she saw at the county fair. The couple love dairy farming so much that they built their own on-farm pasteurizing facility, and they are proud of their efforts since 2019 to make Little Brown Cow Dairy more sustainable, using organic practices and feeding the cows only grass and non-GMO feed.

Make no mistake, though, dairy farming is hard work.

Terry says she often is up and out at 4 a.m. to do the day’s first batch processing the previous evening’s milk, done slowly, at lower temperatures than many operations, in order to avoid degrading the milk’s nutrient value. She then milks the cows. When the first processing is completed and the milk is cooled, she fills jugs and then starts the next batch that will be ready in the afternoon.

Husband Bob does his chores, which include making a nutritionally balanced mix of silage, hay and other plants that supplements the pasture grass on which the cows graze. Orders are delivered to stores and other customers. And a sample of the farm’s milk must be taken to Peoria 30 miles away every day to be tested by inspectors to ensure that there are no traces of antibiotics (the Hoerberts do not use antibiotics non-therapeutically but do use them to treat cows that are ill while separating these animals from the rest of the herd).

There are other animals on the farm: beef cattle that belong to one of their sons, horses (two Clydesdales and a quarter-horse), and a small flock of meat chickens. And there are non-farm jobs. Bob works in construction and Terry does some day care.

Bob and Terry briefly considered giving up dairy farming after enduring two wrenching tragedies in late 2017. The farm was then a commercial dairy and they had plans to include other family members in an expansion, when their future son-in-law died in a car accident and their own youngest son died less than three months later.

“Of course, when that happens in life it kind of gives you a different perspective,” says Terry. “We weren’t going to be able to grow… We were going to just quit dairy altogether.” But they decided to press on, and Kortney suggested building the processing plant on the farm. Along with Kortney, the Hoerberts get help from one son who lives on the farm and another who lives not far away. Another son lives in Oklahoma and his wife designed the dairy’s product labels. The Hoerberts also have a total of six grandchildren.

The Hoerberts also downsized their herd from a peak of about 60 cows to their current 19 and began the process that led to the farm becoming sustainable. They then were rewarded for their perseverance during the COVID-19 pandemic, when their farm benefited from the uptick in consumer interest in locally produced food.

“There were several people that would say, ‘We’re not going to go to Walmart, we’d rather come to you and get our milk,’” Terry says. “We were in awe that they were doing that. I mean, that was an extra trip, some were coming an hour away to get milk… They wanted to know where their product was coming from, and I think there was a little bit of an appeal to small family farms.”

She continued with an anecdote about a visitor who just wanted to see if the cows were happy before she bought any milk: “She saw that they were happy. They were out in the pasture. They were chewing their cud. They were laying down. And that was all she needed.”

Just be aware that there is one hard and fast rule to buying milk at Little Brown Cow Dairy. Terry says you’re not a customer until you’ve been licked by one of their cows.

Terry Hoebert shared this list of locations where you can buy Little Brown Cow Dairy’s milk:

Other Dairy Farms Near You

Get Listed for FREE with BFBL today

From the IL Farm Bureau As concerns and uncertainty grow around coronavirus (COVID-19), Illinois Farm…

For generations, most restaurants have obtained the ingredients for the meals they serve their customers…

CSA’s the Best Way to Know Your Farmer and Your Food: The Broadview Farm Story